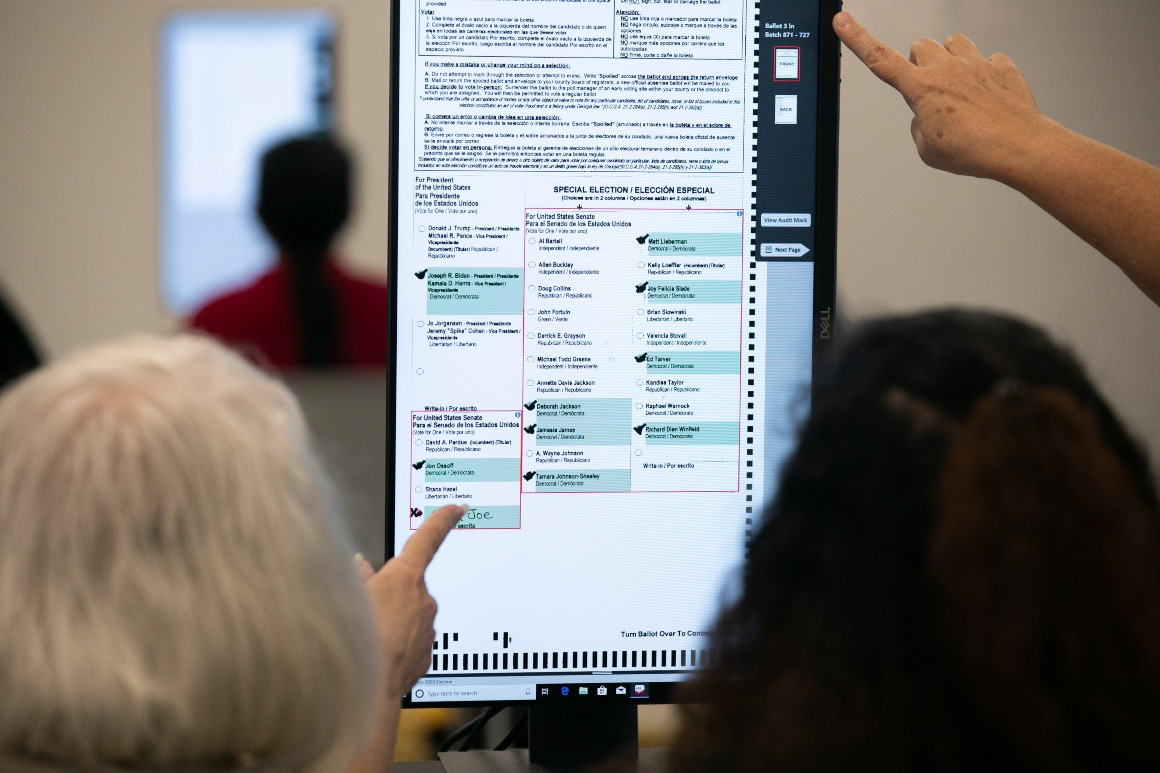 They returned the next morning to discover not only were the ballots bone dry (and always had been) but counting had continued throughout the night in their absence.

The Georgia GOP issued a letter asked for clarity about election procedures.

Dominion Voting Systems election software was implemented in all of Georgia’s counties for the first time this year.

“Tens of thousands of votes counted toward Vice President Biden’s final tally were the product of illegality, and physical and computer-based fraud leading to ‘outright ballot-stuffing’,” the Republican Electoral College nominees alleged Friday in an Emergency Request that, “resetting the machines would destroy relevant evidence.” The request alleges that 96,600 mail-in votes were illegally cast.

Georgia GOP Chairman David Shafer: “Our Republican recount monitors at the World Congress Center waited today for four hours while Fulton County elections officials “updated the software.” The explanation given to me – “just the usual Fulton County incompetence” – is completely unacceptable. Thankfully Lin Wood this afternoon obtained an emergency federal court order prohibiting any “wiping” or “resetting” of the voting machines. It is outrageous that we cannot rely on Fulton County elections officials to do their jobs without unexplained four-hour delays, interventions by private attorneys, and federal court orders.”

“Computerized vote recording and tabulations are controlled by software programs that were designed to cheat, and which were open to human manipulation. In 2020, ballot stuffing is not simply counting votes of dead people, illegal aliens or out of state residents – all of which clearly occurred here.”

An Emergency Order entered by Judge Timothy C. Batten, Sr.: “Plaintiffs contend that union county officials have advised that they are going to wipe or reset the voting machines of all data and bring the count back to zero on Monday, November 30,” the court order stated. It went on:

The judge reversed the federal order shortly thereafter based on the Defendants’ claim that Georgia counties control voting machines, despite those machines being evidence in a Federal lawsuit.

Counsel for the Defendant’s argue that forensic inspections “would pose substantial security and proprietary/trade secret risks to Defendants,” according to Sunday’s order. A similar suit by Jill Stein to forensically audit the machine code from the 2016 election took 4 years.

However, the Plaintiffs said they could alleviate any concerns by allowing Defendants’ to bring their own experts to take part in the video-recorded inspections and allow the experts to give whatever information they recover solely to the court, according to the order.

There is ample circumstancial evidence that the machines have likely been tampered with.

“Georgia’s new electronic voting system is vulnerable to cyberattacks that could undermine public confidence, create chaos at the polls or even manipulate the results on Election Day,” reported the Atlanta Journal-Constitution (AJC) in October.

The report added that computer scientists, voting-rights activists, U.S. intelligence agencies and a federal judge have continuously warned of security deficiencies in Georgia’s system, but state officials have dismissed their concerns.

An investigation by AJC also determined that Secretary of State Brad Raffensperger’s office weakened the system’s defenses by disabling password protections on a key component that controls who is allowed to vote.

Officials tell voters to verify their selections on a paper ballot before feeding it into an optical scanner. But the scanner doesn’t record the text that voters see; rather, it reads an unencrypted quick response, or QR, barcode that is indecipherable to the human eye. Either by tampering with individual voting machines or by infiltrating the state’s central elections server, hackers could systematically alter the barcodes to change votes.

Such a manipulation could not be detected without an audit after the election.

The new voting system “presents serious security vulnerability and operational issues” caused by “fundamental deficits and exposure,” U.S. District Judge Amy Totenberg wrote in a recent order, in which she criticized state officials for not taking the problems more seriously.

“These risks,” Totenberg wrote, “are neither hypothetical nor remote under the current circumstances.”

The report added that Texas rejected Dominion Voting Systems, saying its inspectors encountered “multiple hardware issues” and could not certify that it was “safe from fraudulent or unauthorized manipulation.”

A Bombshell video released during the hearings appeared to show fully processed ballots processed in the middle of the night.

Georgia Governor Brian Kemp is now calling for a “signature audit” of ballots in Georgia.

The announcement comes following the presentation of an election-night surveillance video presented before the Georgia State Senate Judiciary Committee that allegedly showed at least four suitcases of ballots being pulled out from under a table after election supervisors had told poll workers to leave the room at the State Farm Arena in Fulton County, Georgia.

In the first video, according to the person detailing what’s in the video, the lady with the blond braids tells everyone they are going to stop counting and to go home. It’s around 10:30 PM on November 3rd. After the poll workers leave, that’s when all of these suitcases full of ballots are pulled from underneath a covered table:

But explanations that these were not suitcases, but instead, were official ballot lockers.

Sterling told Newsmax on Friday that the video does not show what the Trump team claims.

In particular, Gabriel Sterling, Georgia’s voting system implementation manager,  said “We’ve had our investigators watch all, many, several hours of it yesterday and what essentially happened is, and we knew about part of this on election night itself, around 10:15-10:20, ther’s two groups of people in this room that are working,” Sterling stated. “There are cutters, the people who are opening the envelopes, and there’s the ones who are scanning.”

At that point, the cutters had finished their job and started to leave, he continued. Others, including the scanners, started to leave as well, but were then directed to stay.

The election monitors left, and they claim that they were told to do so by officials, although that cannot be ascertained because the video, which caught the interaction, did not record the audio, Sterling said.

Sterling said that there was an “82-minute” period where there was no election monitor in the room; however, there is footage of that entire time. He also dismissed the notion that the containers the ballots were in were suitcases.

“Those aren’t ‘suitcases,’ those are regular absentee carriers used in dozens of counties across this state,” he added. “That’s how they bring those in. Nothing was brought in without the monitors there. So everything was there. There was nothing new brought in. We didn’t see somebody wheeling stuff into the room.”

Apparently the Secretary of State has already investigated this footage and they say this is just normal ballot processing and there’s nothing going on here illegal.

After the full signature audit, We the People, should have a clearer picture of what actually happened. or will we?

Georgia Governor Brian Kemp awarded a $107 million contract to Dominion Voting Systems two weeks after he met with the Houston-based Consul General of the People’s Republic of China in Atlanta.

Kemp met with Li Qiangmin, Houston Consul General of the People’s Republic of China, on July 12, 2019.

The Secretary of State’s office announced on July 29, 2019 that Dominion’s election services were procured to implement a “verified paper ballot system” in the state prior to the March 2020 presidential primaries. And there is no question that the Dominion Voting Systems is suspect.

THE CHAIRMAN’S REPORT OF THE ELECTION LAW STUDY SUBCOMMITTEE OF THE STANDING SENATE JUDICIARY COMMITTEE released their report of the irregularities the occurred during the election.

Related Topics:election integrityhot-topicstrending
Up Next