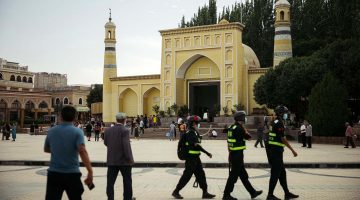 U.S. lawmakers stepped up their efforts to stop China’s human rights violations against Uighurs after reports emerged documenting forced labor, an increasing number of detention camps and the destruction of mosques as Beijing continues its repressive policy against the ethnic minority.

On Sept. 22, the U.S. House of Representatives voted to ban imports from Xinjiang in an effort to stop forced labor from workers belonging to the Muslim minority. In a 406-3 vote, the House overwhelmingly passed the Uyghur Forced Labor Prevention Act, which would prohibit “certain imports from Xinjiang.”

The proposed bill follows the Uyghur Human Rights Policy Act, which was signed into law in June, authorizing sanctions against Chinese officials who are responsible for human rights violations against Uighurs.

“Tragically, the products of the forced labor often end up here in American stores and homes,” House Speaker Nancy Pelosi said. “We must shine a light on the inhumane practice of forced labor, hold the perpetrators accountable and stop this exploitation. And we must send a clear message to Beijing: these abuses must end now.”

We haven’t heard about human hair since the Nazis in the concentration camps of … World War II. It’s brazen and sickening.”

China’s Foreign ministry spokesman Wang Wenbin told reporters that the forced labor “problem” is a “lie” and that the bill “maliciously slandered the human rights situation in Xinjiang,” according to the Associated Press.

An investigation last year by the International Consortium of Investigative Journalists and 17 media partners exposed China’s operations manual for running the mass detention camps in Xinjiang and the region’s mass surveillance operation.

Leaked classified documents at the heart of the China Cables investigation showed how the Chinese government instructed officials to send detainees from camps to job sites under constant police watch.

The United Nations estimated that more than 1 million people were detained in detention camps in the region.

China dismissed ICIJ’s findings as “fake news” and has defended the detention camps, calling them vocational training centers. In a recent report, the government said it has provided training to nearly 1.3 million workers, confirming, according to some researchers, the number of detainees estimated to be held in the camps.

“We must refuse to be complicit”

Journalists and international organizations have been documenting forced labor in Xinjiang since at least 2014, when a U.S. Labor Department report on products produced by forced or indentured child labor said that between 40,000 and 1 million students are forced to pick cotton in Xinjiang and Gansu, both in northwest China.

Since then, the situation has become worse on the ground according to a June 2020 report on human trafficking by the U.S. State Department that found a government policy or pattern of widespread forced labor.

Early this year, a report by the Australian Strategic Policy Institute estimated that more than 80,000 Uighurs from Xinjiang were transferred to work in 27 factories throughout China between 2017 and 2019.

The report said that they would end up working in factories that manufacture products for multinational companies such as Nike and that some facilities were “equipped with watchtowers, barbed-wire fences and police guard boxes.” ASPI also found that Uighur workers would end up in Chinese factories that make components for Apple.

Nike said it would review its suppliers’ hiring practices, according to the Seattle Times. Apple told BBC they didn’t find evidence of forced labor but would continue monitoring.

In July, the U.S. customs agency seized a 13 ton shipment of human hair which, it said, indicated “potential human right abuses of forced child labor and imprisonment.” The finding led to a restriction on imports of cotton, computer parts and apparel products from Xinjiang in September.

“We haven’t heard about human hair since the Nazis in the concentration camps of the war that my father fought in, World War II. It’s brazen and sickening,” U.S. Rep. Michael McCaul said last week when the bill was passed. “We must refuse to be complicit, financially or otherwise.”

In light of these reports, major auditing firms such as TÜV SÜD AG and others recently stopped supply chains for apparel companies in Xinjiang to avoid any possible links with brands that may source their products in the region, the Wall Street Journal reported. TÜV SÜD didn’t respond to ICIJ’s request for comment.

A more recent report by ASPI also revealed that China has built about 400 detention camps in Xinjiang since 2017 and that thousands of mosques in Xinjiang have been damaged or destroyed in just three years.

In July, China officials told reporters that most of the detainees had “successfully achieved employment” and “returned to society”, according to Reuters.

However, ASPI researchers have created a database that maps detention sites across the region and found that there are 14 new camps under construction.

“The evidence in this database shows that despite Chinese officials’ claims about detainees graduating from the camps, significant investment in the construction of new detention facilities has continued throughout 2019 and 2020,” ASPI’s Nathan Ruser told the Guardian.

Satellite images also indicated that 16,000 mosques have been destroyed or damaged over the last three years as a result of government policies. More than 50% of protected cultural and religious sites were demolished or damaged, according to ASPI.

The researchers also accused organizations such as UNESCO of “turning a blind eye” and of remaining “silent in the face of mounting evidence of cultural destruction in Xinjiang.”

The use of Xinjiang as a film set has also caused a backlash against Disney, which shot parts of the film Mulan in the region and, in the closing credits, thanked a number of Chinese government agencies, including one that was blacklisted by the U.S. last year for “human rights violations” in the region.

In a letter to Disney CEO Bob Chapek, a bipartisan group of American lawmakers condemned the company’s partnership. “The decision to film parts of Mulan in [Xinjiang], in cooperation with local security and propaganda elements, offers tacit legitimacy to these perpetrators of crimes that may warrant the designation of genocide,” the letter said.

In Tibet, about 500,000 workers were trained and moved within the region in the first half of 2020 as herders and farmers were subjected to “centralized ‘military-style’ vocational training,” a study by the Jamestown Foundation said. The Utsuls, a Muslim minority of 10,000 people on Hainan island off China’s Southeastern coast, were also reported by the South China Morning Post to be the target of Beijing’s repressive policies, including surveillance and a ban on traditional dresses and hijab, similar to those already enforced in Xinjiang.

The post US moves to ban imports tied to forced Uighur labor in China’s Xinjiang region appeared first on ICIJ.