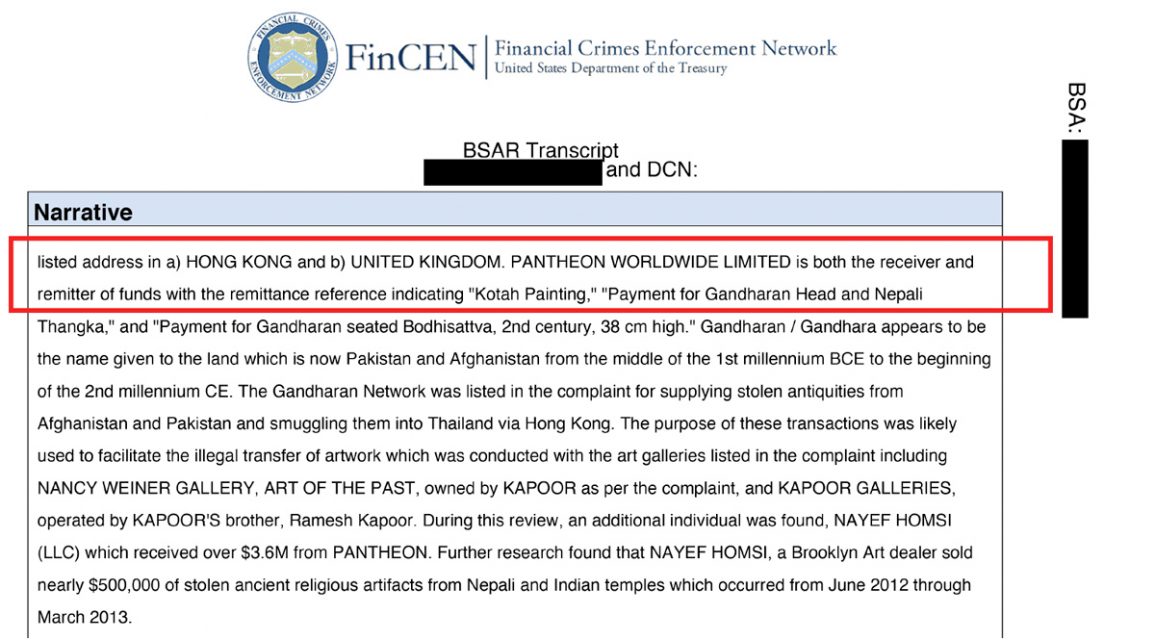 They pulled ancient Buddha heads out of the ground in war-torn Afghanistan and stole idols from temples in India. They cracked open shrines in Nepal, and in Cambodia bought an 11th-century statue of the Hindu god Shiva on the black market.

According to indictments filed in New York last year, a network of art thieves and traffickers extracted thousands of precious relics from archaeological sites across Asia and sold them to museums, elite galleries and wealthy private buyers.

Prosecutors say the group includes suppliers, restorers and New York art dealers who fabricated documents describing the origin of the antiquities to camouflage the looting.

A confidential banking document obtained in the FinCEN Files investigation offers a rare view into the murky supply chain that delivers valuable antiquities to auction houses and major Western museums. It reveals a shadowy shell company called Pantheon Worldwide Limited that exchanged millions of dollars in cash and relics with the alleged traffickers, according to the document, while baffling compliance officers at its own bank, London-based Standard Chartered Bank.

Standard Chartered maintained three accounts for Pantheon in its Hong Kong branch. But bank compliance officers knew next to nothing about their own client, the document shows. They were uncertain about the purpose of the company and didn’t even seem to know where it was registered — the most basic information needed to assess whether it might be a front for money laundering or other financial crime.

ICIJ also tried, and failed, to track down Pantheon. Hong Kong and London addresses listed by Standard Chartered for the company proved to be dead ends, and Hong Kong authorities said no company by that name had ever been incorporated there.

The file — a suspicious activity report leaked to BuzzFeed News and shared with the International Consortium of Investigative Journalists — also suggests that top New York auction houses Christie’s and Sotheby’s conducted transactions involving Pantheon, although the exact nature of those dealings remains unclear. Neither auction house would comment on Pantheon.

The mystery enveloping Pantheon extends well beyond the one company. Operators who move suspect cash and antiquities across borders often use firms set up in offshore jurisdictions to cover their tracks. In the United States, the art market has become the largest legal-yet-unregulated industry, meaning that money launderers and tax evaders can “buy pieces without any record of the transactions,” according to a recent U.S. Senate report.

This secrecy, experts say, also emboldens art thieves, who are looting the developing world’s cultural heritage for the benefit of elite collectors and museums. “Archaeological sites around the world are being destroyed on an industrial scale,” said Tess Davis, executive director of the Antiquities Coalition, which advocates the return of stolen relics to their home countries. “We are losing chapters of history.”

The world’s most prestigious museums regularly display relics obtained long ago through murky means. But murky does not necessarily mean illegal.

Many antiquities laws meant to prevent the looting of national treasures are relatively new and do not cover some works that were exported from countries before the laws were enacted. India, for example, didn’t enact a robust law limiting the export of certain antiquities such as paintings until 1972.

Strict export laws and increased pressure on sellers of antiquities to provide a detailed provenance — records of the origin and ownership of a piece — were supposed to quash the illegal trading of sculptures, paintings and other historical objects.

Over the past decade, the Manhattan District Attorney’s office has filed criminal charges against several prominent art dealers, in cases that have involved some of the biggest auction houses and museums.

One of the accused is Subhash Kapoor, the former owner of a Manhattan gallery called Art of the Past. A 200-page criminal complaint details hundreds of items allegedly smuggled by Kapoor, whom U.S. authorities described as “one of the most prolific commodities smugglers in the world.”

In raids on Kapoor’s warehouses in Manhattan and Queens, authorities discovered thousands of relics stolen from temples and other vulnerable archaeological sites and then smuggled into the U.S., according to the complaint.

The criminal complaint says that an intermediary for Kapoor entered Afghanistan during the country’s brutal civil war in the 1990s and bribed a Mujahideen commander for access to an archaeological site. The deal allegedly yielded two stucco Buddha heads dating to the ancient Gandhara civilization, which spanned parts of present-day Pakistan and Afghanistan hundreds of years before the rise of Islam.

A separate complaint accuses Kapoor of smuggling an ancient statue of a Hindu deity from India to New York in a container filled with legal handicrafts. Nancy Wiener, a prominent art dealer, appraised it at $3.5 million, the complaint states..

Wiener was indicted in New York in 2016 after allegedly selling millions of dollars in looted antiquities — from Afghanistan, Thailand, Cambodia, India and other countries — through her Manhattan gallery.

Her ultimate buyers included Sotheby’s and Christie’s, the latter of which sold one batch of works for more than $12 million, according to the indictment. Authorities did not charge Christie’s or Sotheby’s with wrongdoing.

Archeologists and others in the art world have accused Christie’s and Sotheby’s of turning a blind eye to inadequate or suspicious origin records.

Last year, in a separate case, a renowned Greek archaeologist called on Christie’s to cancel an auction of a first-century Roman statue because of the work’s alleged links to “notorious dealers connected with numerous cases of illicit antiquities.” In 2011, Sotheby’s canceled an auction of a Khmer statue after the Cambodian government lodged a formal complaint against the auction house arguing that the piece had been obviously looted.

Kapoor and Wiener have denied the charges against them, which remain pending. Georges Lederman, an attorney for Kapoor, told ICIJ that prosecutors have begun holding antiquities dealers to new, more rigorous “standards of due diligence” for works they purchased decades ago. Kapoor is jailed in India and awaiting extradition to face charges in the United States.

Wiener is free on bond. Her attorney, Evan T. Barr, declined to comment.

The 2017 Standard Chartered suspicious activity report was reviewed by ICIJ as part of the FinCEN files, an investigation based on more than 2,100 leaked suspicious activity reports filed by banks with the U.S. Department of Treasury’s Financial Crimes Enforcement Network. SARs reflect concerns by compliance officers within banks and are not necessarily evidence of any criminal conduct or other wrongdoing.

The Standard Chartered report summarizes 413 financial transactions over a seven-year period, totaling $27.8 million. Seventeen people and companies with links to the United States, Hong Kong and India are named in the report, including several of those named in criminal complaints.

Pantheon worked with Kapoor and Wiener for the apparent purpose of facilitating the “illegal transfer of artwork,” according to the report. A Nepalese painted tapestry known as a thangka, an Indian painting and a 15-inch seated bodhisattva moved through Pantheon, the report said.

The report said that Wiener received more than $1.6 million from both Pantheon and another company.

According to the report, Pantheon also paid more than $3.6 million to Nayef Homsi, a Brooklyn art dealer. Homsi was charged in 2015 and subsequently convicted in New York of importing a stolen 13th-century Nepalese gilt bronze statue of a Buddhist deity. The statue was valued at $484,500, according to a New York State indictment. This work was not referenced in Standard Chartered’s suspicious activity report.

The bank’s report did not include exact dollar amounts of transactions involving Kapoor. It also does not specify the nature or dollar value of the transactions tying Pantheon to Christie’s and Sotheby’s.

Christie’s and Sotheby’s declined to comment on Pantheon Worldwide Limited. Cat Manson, a spokesperson for Christie’s, said the auction house had nothing relevant to share and that it was unable to disclose information, even if Pantheon had been a client. The auction house conducts “initial and ongoing due diligence on our clients for AML purposes,” Manson said in an email.

Pantheon’s role — if any — in the criminal cases that embroiled Kapoor, Wiener, Homsi and others is not clear.

Standard Chartered’s suspicious activity report provides a street address for two Pantheon offices in a building in Hong Kong’s central district. Yet the Hong Kong corporate registry contains no trace of the company.

The report included a secondary address for Pantheon in the United Kingdom. But this address belongs to a U.K.-based Pantheon Worldwide Limited that was registered in 2016, four years after Kapoor was jailed in India. The accounting firm that established the company said that the U.K.-based Pantheon had never dealt in antiquities — or anything else for that matter. “To the best of my knowledge, the company never traded at all,” a spokesperson for PRB Accountants told ICIJ.

ICIJ also found a Pantheon Worldwide registered in the Bahamas, but the company ceased operating in 2007, years before the millions of dollars flowed through Standard Chartered’s bank accounts.

It is crucial for banks to know their customers’ true names and addresses. “Knowing the jurisdiction in which a company is registered is really crucial to determining the risk of the customer,” said Ross Delston, a Washington-based attorney who specializes in anti-money-laundering systems and regulations.

In 2014, financial regulators in New York state fined Standard Chartered $300 million and negotiated a consent order requiring it to gather better information from its Hong Kong and Dubai branches about customer transactions. The order emphasized the importance of bank branches sharing accurate addresses, including the country of individuals originating and benefitting from all transactions.

Standard Chartered did not directly respond to questions about Pantheon Worldwide, but defended its compliance efforts in broad terms. “We take our responsibility to fight financial crime extremely seriously and have invested substantially in our compliance programmes,” the bank said in a statement. “Standard Chartered has nearly 2,000 staff worldwide dedicated to preventing, detecting and reporting suspicious transactions, and all staff are trained in sanctions and anti-money-laundering compliance.”

Financial secrecy has factored into all of the largest antiquities looting scandals.
Leila Amineddoleh

Among the only mentions of Pantheon that ICIJ could find in a public record emerged in descriptions of four antiquities listed for sale online by the high-end auction house Bonhams. Each listing describes Pantheon as a recent owner of the works.

The auction listings, all posted in 2018, describe a colorful Tibetan painted tapestry, a copper figurine of a seated 16th-century Tibetan king and two paintings from Mughal-era India, including one called “A Lord and His Harem Enjoying a Fireworks Display on Shab E Barat.” Each of these works date back at least 400 years.

The Bonhams listings state that Pantheon is based in Hong Kong. In a statement, Bonhams said that it did not receive the four works from Pantheon. “Bonhams undertakes only to sell items that have been entered for sale via the correct procedure,” the auction house said.

Unlike big banks, none of the auction houses linked to Pantheon were required to file suspicious activity reports with the U.S. Treasury Department. Legislation supported by law enforcement authorities would require antiquities dealers to file such reports. It passed easily in the U.S. House of Representatives last year but stalled in the Senate.

Precious metal dealers, stock brokerages and casinos are examples of businesses other than banks that are required to file suspicious activity reports.

“Financial secrecy has factored into all of the largest antiquities looting scandals,” Amineddoleh said. “Anonymity in this market runs very deep and it remains a serious problem.”