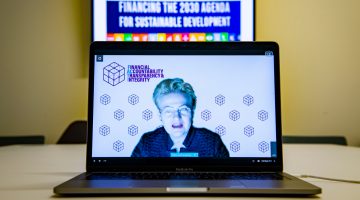 Countries lose more than $427 billion in revenue each year from tax dodging by companies and wealthy individuals, according to groundbreaking new research by the Tax Justice Network.

The nonprofit published the “State of Tax Justice” report on Friday and estimates that global tax losses could pay for the salaries of almost 34 million nurses around the world. The United States, itself a tax haven that strips money from other countries, lost enough revenue from its own residents and corporations to pay for the salaries of more than 1.1 million nurses paid an average U.S. salary, TJN Found.

“A global tax system that loses over $427 billion a year is not a broken system, it’s a system programmed to fail,” Alex Cobham, chief executive of the Tax Justice Network, said at the report’s release. “Under pressure from corporate giants and tax haven powers like the Netherlands and the UK’s network, our governments have programmed the global tax system to prioritize the desires of the wealthiest corporations and individuals over the needs of everybody else.”

TJN says that its report is the first study to provide country-by-country estimates of losses due to corporate tax abuse and tax evasion. As the International Consortium of Investigative Journalists explains here, traditional definitions hold that tax evasion is illegal (a crime), but tax avoidance uses legal loopholes to reduce or avoid paying taxes.

TJN found that multinational corporations avoid $245 billion while the world’s top 1 percent, who have been growing their wealth during the COVID-19 pandemic, avoid $182 billion.

While rich countries lost the most tax revenue in overall terms, poorer countries lost disproportionately more than wealthier countries, TJN found. Latin America and Africa’s tax losses equal 20.4% and 52.5% of those regions’ public health budgets respectively, according to the report.

Senegal in West Africa, for example, loses $168.2 million in revenue from tax dodging companies and individuals each year, according to the research. The amount is more than 70% of Senegal’s health budget. In 2016, ICIJ revealed as part of its Paradise Papers investigation that Senegal could have lost almost $9 million in taxes on one deal with a Canadian company. TJN’s report also shows Mauritius, the focus of ICIJ’s 2018 Mauritius Leaks investigation, drains other countries of more than $1.3 billion in revenue.

What is a tax haven? Offshore finance, explained

Europe is also a major contributor to inequality around the world, U.K.-based TJN found. The report showed that European countries caused 36% of the world’s tax losses. At the same time, countries that have been “blacklisted” by the European Commission for allegedly failing to respect international tax regulations — often small or developing nations, such as Namibia and Samoa — caused global tax losses of just 2%.

The Cayman Islands, the United Kingdom, Luxembourg, the Netherlands and the United States, all tax havens, are the five places most responsible for the world’s tax deficits, TJN found. The research builds on criticism of the European Commission’s decision to remove the Cayman Islands from its tax blacklist in October.

TJN, which published the report with Public Services International, a federation of workers’ unions, and civil society organization Global Alliance for Tax Justice, urged governments to introduce a wealth tax on individuals and an excess profits tax on corporations.

The United Nations should create a tax convention to allow poorer and smaller countries to contribute to global rules that currently favor richer countries, the report concludes.