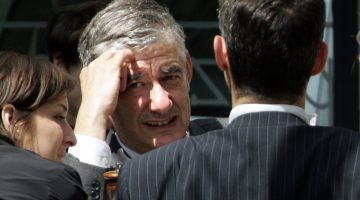 The International Consortium of Investigative Journalists collaborates with hundreds of members across the world. Each of these journalists is among the best in his or her country and many have won national and global awards. Our monthly series, Meet the Investigators, highlights the work of these tireless journalists.

This month, we speak with Musikilu Mojeed, editor-in-chief of Premium Times, one of Nigeria’s best-known investigative news outlets. Musikilu has reported and edited countless investigations in Africa’s most populous country and is one of ICIJ’s longest-serving African members.

Why did you become an investigative journalist?

It’s very simple, but it’s something that I hardly ever talk about. Growing up in high school, I was studying to be an engineer. I wanted to become a chemical engineer because I saw that they were making quite a lot of money.

But I was also president of the press club in high school. At that time, we had a huge impact with some stories. We were doing stories about how senior students were bullying junior students and how some seniors were polluting the environment by defecating. When we exposed them, the school did something.

We did a story about how some teachers were leaving the school campus through perimeter fences rather than by the main exit. For this same offense, students were being beaten and punished every day by teachers. Yet teachers were committing the same crime! We documented teachers doing this. Once we published, the teachers were angry. We had to go underground. The principal called a staff meeting. He said to the teachers, “You can’t do this, you have to lead by example.” I didn’t know that what we were doing was journalism.

That’s how I fell in love completely with journalism. I thought that this is one profession that can cause enormous change in society. From then on, I didn’t want to do anything else.

What investigations are you proudest of?

I don’t think I can recall one in particular because I’ve written or edited or collaborated on so many investigations in my career. I’m really proud of many of them, including the ones I’ve done with ICIJ, from Offshore Leaks to Panama Papers to Paradise Papers to Evicted & Abandoned. I’m also proud of the work we did about the Halliburton bribery scandal in Nigeria, the OPL scandal, extrajudicial killings and many others.

How the World Bank Broke Its Promise to Protect the Poor

Tell me more about one of your and Premium Times’ biggest scoops, the so-called “Malabu Scandal.”

In 2012, less than a year after Premium Times started, we received information that our government had signed a deal with what we considered to be an illegal entity because there was a fake director on the company’s board. This is a case where a former minister of petroleum [Dan Etete] awarded a very lucrative oil concession while he was in power. One of the people on the board of the company was the son of the former dictator, Sani Abacha.

After [Etete] left office, the government that came in 1999 tried to take back the assets from him. There was this back and forth for several years. In 2011, our government signed a settlement agreement with him, which meant Shell and Eni promised our government $1.1 billion. In exchange, our government passed the money to this company, Malabu. This former minister had been convicted in France — he was a fugitive. Even now he’s a fugitive from Nigeria. Our government basically passed money to this guy and then this guy then passed a lot of his money to friends in Nigeria. The money was withdrawn in tranches of cash and we suspect lots of this was used to bribe former government officials.

We broke this story and we’ve been on it all these years.  The matter has been investigated in the Netherlands and in Italy and there were court cases in the U.K. as well as in Nigeria. It’s perhaps one of the biggest scandals in Nigeria. Who were the former government officials that received bribes from Malabu? That hasn’t been determined.

It’s difficult for me to say too much about the case because I don’t want to be accused of tampering with matters before court. But we hope eventually there will be justice.

What was the hardest part of the Malabu story?

When $801 million of the $1.1 billion was paid to Dan Etete, the former minister I mentioned, he in turn divided the money into and passed $401 million to a controversial businessman. A huge chunk of the money was withdrawn in cash. The difficult part of reporting on this is that because the man withdrew cash, it is difficult to trace. $401 million can do a lot for the Nigerian people. If he had transferred the money through a bank institution, then it would have been easier.

Want to know when we publish?

Help us change the world. Get our stories by email.

What is the secret to investigative reporting?

It’s usually very difficult, but you just must stay on top of the story and build sources. There are a lot of good people in Nigeria. And once they trust your platform and once they know you are trying to do good for this country, a lot of these whistleblowers will come out and help you.

One of the first things Premium Times tried to establish when it was created was credibility. Once people trust you in a country where access to information is difficult, you will receive a lot of help. This includes officials because a lot of them are frustrated with the corruption going on and they want to help a credible platform, a platform that will protect them as sources.

Across Nigeria, as with other countries, we’ve seen reports of journalists arrested during Covid-19. You and Premium Times have been targeted by authorities, including recently. How would you describe the situation of the press in Nigeria?

Working in Nigeria is increasingly difficult. Things are getting worse. Reporters are routinely arrested. For us at Premium Times, we have been constantly under attack from the military, the police, and government officials. Our reporters are routinely threatened. My own apartment was breached some time in February. We came under sustained cyber-attack in the early part of this year. It’s difficult. But because we’ve built quite a lot of allies, the Nigerian government knows that any attack on Premium Times is going to attract a lot of global attention. At times they try to be careful. But I must tell you, it’s a difficult job here.

You have a track record of breaking big stories with hard evidence. So why does it sometimes seem like people involved in wrongdoing get off scot-free?

Of course, you haven’t noticed anything from the outside; people have not resigned or been arrested as expected. But it takes a long time in Nigeria to get impact. There were investigations we started long ago and it took more than eight years before we noticed impact. For example, we wrote for a long time about corruption in the oil and gas industry and never saw impact. But, eventually, when a new government came into power, it dusted off our investigations and officials saw a lot of the work that we did. One former minister of petroleum is currently on the run after the government launched an investigation based a lot on work we did.

In Nigeria, when it rains, it pours. You’ve got so much corruption to report on at any given time.

Regarding the Panama Papers, we exposed quite a lot of officials, including serving senators, and the former president of the Senate. We expected the government would move against them. The investigation generated a lot of outrage in Nigeria. Expectations were high that the government would act. The Economic and Financial Crimes Commission reached out to us and the Code of Conduct Bureau reached out. They gave us the impression that there was an investigation, but we haven’t heard anything until now.

One thing we are clear about is that our investigations started a conversation about beneficial ownership. In 2018, President Muhammadu Buhari guaranteed offshore owners a 12-month window to declare their assets. We see that as part of the impact of Panama Papers. That is impact for a country like ours where politicians hardly ever resign, no matter the weight of the wrongdoing. In Nigeria, when it rains, it pours. You’ve got so much corruption to report on at any given time.

Do you believe journalism can make a difference?
For just $15/month you can help expose the truth and hold the powerful to account.

What advice would you give to a young person wondering about a career in journalism?

You must be passionate about what you do. No matter how talented you are, if you don’t have passion, you’ll soon get tired. Journalism won’t bring you millions of dollars. If anything, it will bring you discomfort. You must be very patient, and you must try to be honest.

What good investigative reporting have you followed recently?

There is a piece of work I’ve been following by a reporter with Business Day. He traveled to Maiduguri in the northeast of Nigeria where the Boko Haram insurgency is most serious. He went to document the stories of women who were raped by Boko Haram insurgents. It’s a moving story about the psychological torture they went through.

How do you manage stress?

I try to stay home and play with my children. I love watching football and listening to traditional Nigerian music, fuji, a lot. And I read.

We hope you enjoyed this edition of Meet the Investigators. ICIJ Insiders receive an exclusive sneak peek at behind-the-scenes content in their inbox every month, as well as invitations to regular Insiders-only chat sessions with ICIJ reporters. Find out more and join our community of Insiders here.