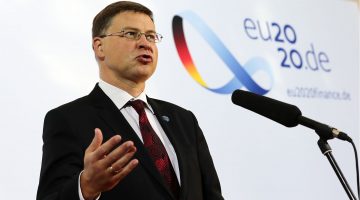 European lawmakers have called for widespread reform of how the banking industry is regulated in Europe and demanded a more coordinated approach to fighting money laundering during a parliamentary debate in response to FinCEN Files revelations.

Thursday’s session of European Parliament devoted more than an hour to the debate, during which time a number of members pressed the need for more financial transparency and stronger oversight of money flows across the European Union.

“Time and again, we see criminals move [money] around the world with relative ease. Each new money-laundering revelation sparks more public anger … The FinCEN Files illustrate the vast scale of the problem,” she said. “The European Union has to act decisively and collectively with the European approach to supervision, the European approach to financial intelligence coordination.”

The FinCEN Files include more than 2,100 secret suspicious activity reports filed by nearly 90 financial institutions to the U.S. Treasury’s Financial Crimes Enforcement Network, known as FinCEN. The documents were shared by BuzzFeed News with the International Consortium of Investigative Journalists and 108 media partners in 88 countries and include information on more than $2 trillion in suspicious transactions.

The year-long investigation shows that a number of global banks, including some of Europe’s biggest banks — HSBC, Standard Chartered Bank and Deutsche Bank — kept profiting from powerful and dangerous players even after U.S. authorities fined these institutions for earlier failures to stem flows of dirty money.

Eero Heinäluoma, treasurer for the Progressive Alliance of Socialists and Democrats in the European Parliament, applauded the work of journalists in uncovering the scale of the problem and demonstrating that the existing anti-money-laundering system in Europe was like a “Swiss cheese, full of holes.”

Heinäluoma was one of a number of members of European Parliament who called for the creation of a centralized EU agency to better police the cross-border money flows, and also hinted at the need for enforcement to go beyond financial penalties.

“Detecting and supervising suspicious cases is one thing, tackling and sanctioning is something else,” he said.

“If we want to be serious in tackling [anti-money laundering], we need more deterring sanctions. Imposing big fines is all well and good, but I have not the impression that it changes fundamentally a culture. Here a stronger role for Europol is really needed.”

Greens/European Free Alliance MEP Sven Giegold joined the call for a FinCEN-like body that could investigate suspicious transactions, and criticized the European Commission for merely observing “without acting” against jurisdictions or criminals abusing the financial system.

“The reason why some of the dirtiest banks, ABLV or banks in Cyprus are coming under pressure, is not because the European Commission or European national authorities have detected this, but because of the FinCEN,” he said.

Earlier in the month, European Commission vice-president for the economy Valdis Dombrovskis, whose remit includes overseeing Europe’s fight against money-laundering, said that the commission would look at providing more resources to support national financial intelligence units in response to the FinCEN Files, but did not commit to establishing a Europe-wide agency. The commission will propose a series of new anti-money-laundering legal measures in the first quarter of 2021.

During Thursday’s session, the parliament also passed a resolution addressing ongoing anti-corruption protests in Bulgaria that specifically called on the country to investigate the Bulgarian banks named in the FinCEN Files investigation. ICIJ’s Bulgarian media partner Bivol reported that a state-owned bank in the country processed suspicious transactions worth millions of dollars linked to arms traffickers and known criminals.