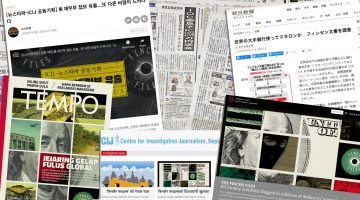 Southeast Asian countries are lagging behind in the adoption of registries with information on companies’ true owners, a tool deemed crucial to fight corruption, money laundering and terrorism financing, according to a report by the United Nations Office on Drugs and Crime.

“While transparency in the banking sector is somewhat regulated,” the report said, “countries in Southeast Asia are considered to be very secretive when it comes to the transparency of ownership of legal entities and other forms of wealth.”

The U.N. estimates that the region generates about $100 billion a year from sources such as the illegal trafficking of timber, drugs, and migrants. Countries such as Malaysia, Indonesia and Thailand are among the top 10 generators of illicit flows, according to Global Financial Integrity, a research organization.

Making the disclosure of company beneficial ownership mandatory would help eradicate financial crimes because it would allow authorities as well as the public to see who’s behind a transaction or a deal.

FinCEN Files, an investigation by the International Consortium of Investigative Journalists, recently found that lack of publicly available information on company ownership hampers client due diligence and anti-money laundering checks by banks.

Bank employees in charge of monitoring illicit money transactions are often unable to identify the beneficiaries of companies based in secrecy jurisdictions and stop dirty cash flows in time, FinCEN Files revealed.

Beneficial owners are “natural persons” who ultimately own or control an entity, according to the definition by the Financial Action Task Force, an inter-governmental body that develops anti-money laundering policies.

In Southeast Asia, the level of transparency varies between countries in the region with Thailand and Cambodia ranking among the most secretive. Those countries don’t publish complete information on company and wealth ownership, according to the UNODC analysis – which doesn’t include countries such as Singapore or Brunei.

The agency also mentioned real estate as a particularly secretive sector where lack of owner information may be a hindrance to law enforcement, as previous research has shown.

When information on property owners is not recorded and reported, properties can be purchased using illicit funds to launder money, embezzle funds or bribe politicians without any oversight, according to a study by Transparency International.

Here’s an overview of ownership secrecy in Southeast Asia:

Indonesia is the only country in the region with a full-fledged beneficial ownership registry. New corporate transparency rules were introduced in March 2018 in an effort to prevent and combat illicit activities, protect corporations and shareholders, and to recover assets in an effective manner. Information on company ownership must be updated regularly and is available for a fee.

Malaysia is moving to make beneficial ownership disclosure mandatory for most companies. According to the new guidelines, companies are required to keep the information at their offices, ensure its accuracy and provide it to law enforcement if necessary. Beginning in 2021, they will have to notify the registry.

“Not having strong beneficial ownership legislation is not an option,” the Malaysian Anti-Corruption Commission’s chief commissioner Latheefa Koya told reporters last year, according to Mongabay.

The country was recently engulfed in one of the world’s biggest financial scandals involving Malaysian sovereign wealth fund 1Malaysia Development Berhad, or 1MDB. It resulted in a 12-year prison sentence for Malaysia’s former prime minister Najib Razak, who was found guilty of corruption and other crimes in July. He has appealed the verdict.

Companies in the extractive sector that want to apply for a license have to provide information about their real owners. The registry for these companies is publicly available.

Beneficial ownership information is required for companies in the extractive sector but such information has not been reported yet “due to data privacy concerns,” according to the UNODC report.

The Philippine Security and Exchange Commission also requires all SEC registered stock and non-stock domestic corporations to disclose ownership. However, the information is not publicly available.

The country doesn’t have a mechanism to record or report beneficial ownership information, and the definition of “beneficial owner” remains unclear. Only a business registry with basic company information is available.

In 2018, Irrawaddy reporters used Paradise Papers documents to reveal how the wife of a powerful Cambodian army chief had used shell companies to obtain coal mining licenses in the North. Global Witness experts consulted by Irrawaddy said the structure may have been set up “with the explicit purpose of obscuring the real owners of the Cambodian company.”

Like Cambodia, Thailand doesn’t have a mechanism to record or report beneficial ownership information. Only basic company information is available to the public.

FinCEN Files investigations from across Asia

The next step: verifying the information

Despite recognizing some developments in the region, the UNODC report concluded that all countries in Southeast Asia must ensure that information on owners is recorded and verified.

Without that, “law enforcement agencies will encounter significant challenges in detecting and investigating suspicious cases, and financial institutions will not be able to carry out reliable due diligence on their customers,” it said.

Experts agree that many governments should do more to regularly check whether the information provided to them is accurate in order to prevent stolen identity cases where innocent people may beare used in lieu of real owners.

“Verification is a big challenge that many [Southeast Asian] countries face,” UNODC’s Cornelia Koertl said during a September 29 webinar.

Koertl said that she observed some recurring “tendencies” across the region. In some cases, owner verification is not mentioned in a country’s regulation and, in others, information is verified only “when necessary,” without specifying further criteria, she said.

Experts on the panel agreed that verification is also a widespread problem in countries such as the U.K. that have a more developed company registry.

During the FinCEN Files investigation, reporters tracked down a Belgium-based dentist named Ali Moulaye who had his signature on financial statements for 385 U.K. shell companies flagged in banks’ suspicious activity reports.

Moulaye was never charged with wrongdoing.

After FinCEN Files reporters inquired about the U.K. business registry’s flaws, the government announced reforms to Companies House in order to “clamp down on fraud.” Moving forward, the registry will verify company directors’ identity, and investigate and remove false information.

FinCEN wants to clamp down on small payments fueling crime